Mncedisi Ndlovu and Sedumedi Attorneys (MNS) has welcomed a Press Council ruling that City Press newspaper committed multiple breaches of the Press Code in an article about the firm on 5 January 2020.

The newspaper had claimed MNS was involved in a “bribery scandal” relating to its forensic and legal work for Transnet. The newspaper based its article on a recorded discussion which supposedly took place between MNS chairman Mncedisi Ndlovu and former Transnet board member Seth Radebe.

MNS took the newspaper to the Press Council, arguing that the article had breached numerous sections of the Press Code.

The Press Council handed down its ruling on 29 June 2020, with acting Assistant Press Ombud Johan Retief declaring: “I believe the reportage did not exercise proper care and consideration involving the reputation of MNS and, by implication, of Mr Ndlovu.”

Responding to the ruling, MNS managing director Tshiamo Sedumedi says: “It has been a long wait, but our firm and our chairman have been vindicated by the Press Council finding – with at least 10 breaches of the Press Code found in one article.

“The Press Council process was rigorous, and its findings are detailed. And it is now clear for all to see that the newspaper’s claims were baseless.

This was highly questionable ‘journalism’, as we said at the time. We believe the article was designed to cast doubt not just on ourselves as a firm, but on the integrity of the large number of forensic and legal investigations that have been carried out for Transnet — and it has failed,”  – says Mr Sedumedi.

As a result of the findings, City Press has been directed to publish an apology to MNS and to Mr Ndlovu for:

The editor of City Press has been directed to publish the apology at the top of the front page (where the January article appeared), with a headline containing the words “apology” or “apologises”, and “MNS, Ndlovu”. The newspaper has also been ordered to apologise online (at the top of the relevant page), and on its Twitter account.

MNS appreciates the support received from clients and stakeholders during this period. The ruling is clear vindication that drives the firm to continue producing quality legal work and act with the utmost professionalism and integrity. 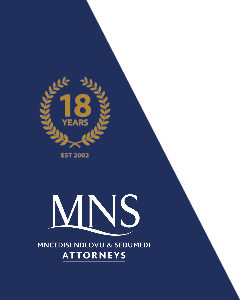